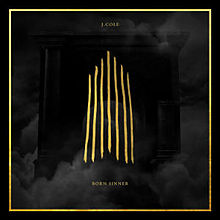 Born Sinner is the second studio album by American hip hop recording artist J. Cole. The album was released on June 18, 2013 in the United States under Dreamville, Roc Nation and Columbia Records. It is the follow-up to his debut album, Cole World: The Sideline Story, which was released in 2011. The album features guest appearances from Miguel, Amber Coffman, Jhené Aiko, James Fauntleroy, Bas, TLC, Kendrick Lamar and 50 Cent. The album was also primarily produced by Cole himself, along with others such as Jake One, Syience, Christian Rich and Elite.